Docker has been a hot commodity for the past couple years. A lot is happening around it and even the big companies are getting involved

My hope is that this presentation will spawn a regular meeting of people that are interested in this technology. But, in order to do that I need to convince you this is worth exploring further.

Stand by for sales pitch

Programmers, what if your first day on a new job or a new team I told you that in order to work on the application code you have to first download these zip files from the internet and extract them to a specific location on your computer. Then change variables in these certain files in order to match your machine. Next, ftp files from this server into this specific location and don't worry if it overwrites some of the other files you just downloaded. Finally copy and paste this text from this email into a file called Makefile and then you should be able to build the code.

Now if you have to make changes to anything (which I hope you will if you plan to fix any bugs or add any features) Make a backup copy of the file you're changing. You might notice some other backups there so just use old1..N or bak or something like that. Then take the copies of your files back to where you originally got them from and either send an email to the group with what you changed.

Would anyone not run screaming from this job? It would be crazy right?

But this is what we do with our servers isn't it?

This isn't just for our application servers either is it. How about a wiki page for your build server? I think everytime I have had to make one of these it all goes fine for the first few commands and then things start getting sketchy. Some version is wrong or something changed in the distro.

Sysadmins, do I have anyone here that would identify themself as more of as sysadmin than a programmer?

So what if I told you that from now on the only thing you'll have to run on your server will be a .exe file. Every application, service, daemon will come to you as a single self contained executable file and any upgrades will be as simple as replacing that file.

No conflicts, no instructions, just copy the file and run.

I would assume that many of you manage virtual servers? Would it help if you didn't have to deal with resource allocation anymore? No more arbitrarily deciding how much ram to put into an instance only to have to change it later when one application grows faster than the other. You can leave all this management to the kernel.

Now this is a short talk so we might not have time to get through everything. Valera said his team is using Jira for issue tracking and TeamCity for build automation.

Let's see if we can get one of those setup and configured in the next few minutes. Which should we do Jira or TeamCity?

And then we can view the site in firefox

I guess maybe we have time for TeamCity too

What do you think? Does this not just blow your mind? Are you not entertained!

Let's explore a little and see how this is possible

What happened, I just started a virtual operating sytem as defined by my ubuntu template, and loaded a bash shell

I can't even find the VMWare icon on my computer that fast.

There's no apache, no drupal, jira or anything. This is a clean slate.

Working in here feels like working in a virtual machine. And it kind of is. But it's different because the virtual machines that you're familiar with are virtualized at the hardware level and Docker virtualizes at the operating system level.

But I can treat this like a virtual machine. And make configuration changes

So I installed something and it works.

Everytime I use this run command I get a new virtual operating system built from my template. Which means if I were to rerun the same command I would not have curl installed anymore.

If I want curl to be available in my container I have to put it into my image.

I see my /bin/bash container here named mad_davinci. I can refer to it by that name or its CONTAINER ID which you also see printed in the shell window.

What I want to do is tell docker to create a new image based on the way my container is now.

This is one way to build images, another way would be to use Dockerfiles which capture all your instructions in a file that can be executed by docker. 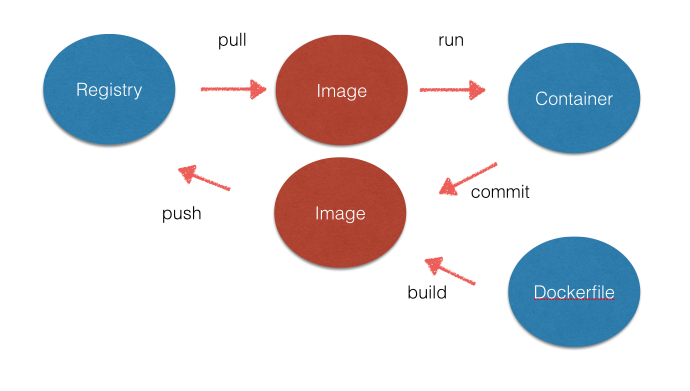 I hope this has given you an idea of the capabilities and potential of Docker.

I really think this is the future of application delivery.